A Review of the Vladdin RE

If you’re in the market for a new pod vaporizer you’re going to want to check out the Vladdin RE. Vladdin has really outdone themselves with this latest pod device, featuring a surprisingly long lasting 1500mAh battery, the Vladdin can last through a whole day of salt nic vaping with ease. Even if it doesn’t, the Vladdin RE goes from low power to full charge with less than an hour of charging time!

Not to mention the futuristic look of this device, I really enjoy the tapered oval shape of the Vladdin RE. It feels sleek and smooth in your hand and often times I found myself gripping it between my fingers like a regular cigarette. This is a big plus for me, with pod based devices I always prefer a thinner body but the rounded design of the Vladdin RE really takes ergonomics to the next level. It measures less than 4 inches long so you can comfortably fit the Vladdin RE in any pants pocket or purse.

I don’t typically chain smoke pod devices, but even with hitting the Vladdin once every 30 min or so whilst playing some Red Dead Redemption 2 at home, it was still going strong at the end of the night. Another great perk is that the Vladdin produces more vapor than almost any other pod device on the market, especially a certain USB dock charging device.

The Vladdin RE utilizes a refillable pod cartridge which holds up to 1.5ml of E-Liquid, perfect for high concentration salt nic vaping. I was testing mine with Cubano Silver from VGOD and the flavor production with the Vladdin’s ceramic coils was amazing! Filling is a breeze as well, a silicon plug prevents leaks and the dual fill holes on the cartridge are roomy enough to insert a unicorn tip so you can refill your pod without any mess.

A gold plated magnet on the base of the cartridge snaps it into place on top of the battery, its a tight connection and holds firmly throughout heavy usage and pocket movement. It’s a draw activated device so there’s no settings or buttons to mess around with, you simply puff on the mouthpiece and a blast of vapor is produced to satisfy your cravings.

While I was testing the Vladdin RE I noticed that, unlike every single device I’ve ever used, there’s zero gurgling and no spitback whatsoever. I don’t know if you’ve ever had spitback while vaping 50mg salt nic but let me tell you, it is definitely not something you’ll enjoy experiencing. I gotta give the manufacturing team behind the Vladdin RE a huge thumbs up for that quality construction. 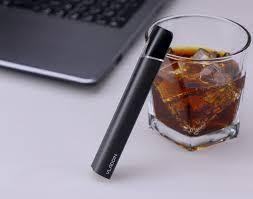 At the end of all my tests I have to say I’m very pleased with the Vladdin RE. It’s outperformed most of the other pod devices I’ve tested in almost every regard and it seems like the Vladdin will keep performing spectacularly for a long time to come. My only gripe with this device is that the battery life indicator is pretty static, all it displays is a bright white LED light while charging or operating the Vladdin RE. But besides that I highly recommend trying this device out if you’re in the market for a sturdy and reliable compact vaporizer.